Kesatuan Sekerja Industri Elektronik Wilayah Barat Semenanjung Malaysia [Electronic Industry Employees Union Western Region (EIEU Western Region)] have submitted for recognition of the Trade Union in Renesas Semiconductor KL Sdn but alas the company has refused recognition - and, if this is the case then the Registrar of Trade Union should conduct a 'secret ballot' at the factory and if the majority of the workers agree to the union - it will be recognized.

But Renesas having been placing many hurdles preventing the 'secret ballot' - hence the court case...

Even after the company failed at the High Court, and allegedly there was no court order barring the conduct of the 'secret ballot' - it was still not carried out...
Now, the Court of Appeal has rejected Renesas's appeal with cost... will the 'secret ballot' finally be conducted and the union recognized...? 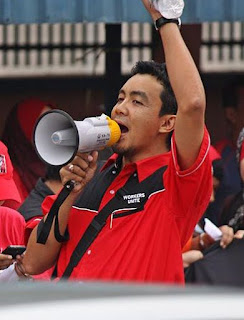 It must be noted that  Wan Nurulazhar bin Mohd Hanafiah, the President of the Electronic Industry Employees Union Western Region (EIEU Western Region), was also terminated by Renesas Semiconductor KL Sdn Bhd, where he worked, on 26/8/2011.Wan Nurulazhar claims that he was wrongfully dismissed. The case is now at the Industrial Court.

Source: Court of Appeal Website
Posted by Charles Hector at 10:53 AM No comments: