Posted by Charles Hector at 9:54 AM No comments:

AEPF says no to 'outsourcing' and short-term contracts 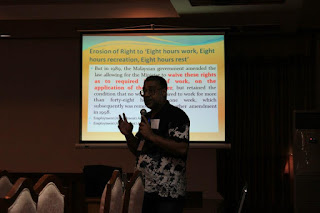 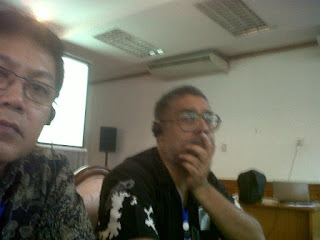 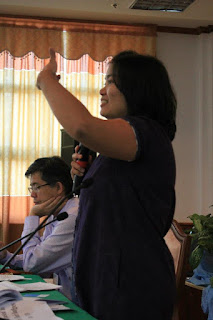 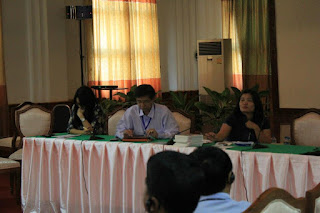 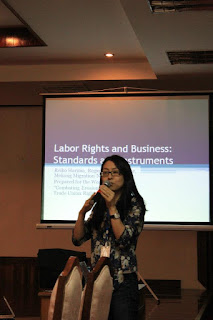 What was interesting was the outcome of the workshop entitled "Combating Erosion of Worker and Trade Union Rights'', which was attended by about 80-100 participants, who did at the end of the 3 1/2 hour program on the 18th afternoon come up with recommendations, all of which were discussed and adopted unanimously. (See below)

The call was for the abolition of outsourcing [i.e. the contractor for labour system], and short-term employment contract..
Regular employment with security of tenure until retirement

“People’s Solidarity against Poverty and for Sustainable Development: Challenging Unjust and Unequal Development, Building States of Citizens for Citizens”
Vientiane, Laos, 16-19 October, 2012
Conclusions/Recommendations from the participants of the Combating Erosion of Worker and Trade Union Rights Workshop, that took place at 2pm, 18/10/2012

1. Ensure that workers have the right to regular employment with security of tenure until retirement.

2. Abolish short-term or fixed duration employment contracts, and if still needed in exceptional situation should be limited in its use.

4. Labour suppliers, contractors for labour or labour outsourcing companies should never be employers of workers.

1. Ensure that all worker rights are respected, including rights of access to avenues of justice, social security, healthcare, compliance with occupational health and safety standards and decent work.

2. Migrant workers shall be allowed to work and stay legally until their complaints and claims are finally adjudicated and settled.

3. All workers, irrespective of their nationality or legal status, shall have the right to labour rights, including a right to form and/or join trade unions and collective bargaining, consistent with the international core labour standards.

C. Recommendation about UN/Regional Standards and Instruments
1. In cases of rights abuse, human rights defenders, including CSR/TNC compliance monitoring bodies, should issue alerts, lobby companies and governments, raise awareness among the general population and support workers who want to fight for their rights.

2. Trade unions and CSR/TNC monitoring bodies should inform the workers of codes of conduct of companies and their supply chain, as well as relevant government policies.

3. Trade unions and CSR/TNC monitoring bodies should lobby the governments to ensure that trade agreements include guarantees for labour conditions and rights of workersใ

4. CSOs in countries where the production is based and where the investment is coming from to strengthen their collaboration.

5. Trade unions and CSR/ TNC monitoring bodies should connect workers and their representatives with the global movement, including AEPF.

1. When governments and/or ASEM have discussions/engagements with Investors, Trade Union must always be part of the process.

2. Trade unions must be included in law and decision making processes at the national regional and international levels.

3. Stronger collaboration between trade unions across sectors and regions is needed, and a strong transnational network of trade unions should be developed.

This workshop was organized by Workers Hub For Change(WH4C), Network of Action for Migrants in Malaysia (NAMM), MAP Foundation, Mekong Migration Network (MMN), Clean Clothes Campaign(CCC), GoodElectronics Network and Asia Pacific Forum  On Women Law and Development(APWLD)
The recommendations/position of this workshop was included in the Final Statement of AEPF, that have been handed over to the relevant Minister of Laos, who has given his assurance that this statement will be handed over and hopefully considered by the leaders of the European and Asian nations that will be meeting in a few days time.
Posted by Charles Hector at 7:02 AM No comments:

Besides this, Syed Mokhtar also controls the Port of Tanjung Pelepas and Johor Port as well as took over Pos Malaysia via DRB Hicom.

The group, led by Railwaymen's Union of Malaya (RUM) leaders, chanted slogans, sang songs, and held up banners for over an hour beginning 5.30pm, almost always under the blare of their air horns.

"RUM strongly opposes MMC's attempt to take over KTMB," the group chanted, while also urging new KTMB president Elias Kadir to be given the chance to turn around the loss-making company.

About 30 police officers - some of whom were uncharacteristically armed with combat weapons - kept close watch and helped to direct traffic until the protest ended peacefully.

In his speech, RUM president Abdul Razak Md Hassan said MMC’s takeover would threaten the workers’ welfare benefits in its cost-cutting measures, such as affordable housing, bonuses, and medical care.

He pointed out that KTMB already loses between RM150 million to RM200 million annually, and is bound to lose more money under the 2013 Budget, which calls for a discount for passengers earning below RM3,000 a month.

“That means we are losing money. What is MMC’s true motive for taking over a loss-making company?” he asked.

At a press conference later, Abdul Razak also questioned MM’'s ability to maintain KTMB’s role as a public service provider, especially in view that its fares are below market price, MMC is a profit-seeking company and the government’s pledge to give discounts.

He estimated the crowd at about 800 people, hailing from ten RUM branches throughout the peninsula.

Posted by Charles Hector at 11:48 AM No comments: